IMPORTANT NOTICE REGARDING
THE 2022 POISSON d'AVRIL
CONTEST CAN BE FOUND HERE:
http://lists.contesting.com/archives//html/CQ-Contest/2022-03/msg00103.html
and an important update here:
http://lists.contesting.com/archives//html/CQ-Contest/2022-03/msg00106.html
One of these wonderful "certificates" can be yours! 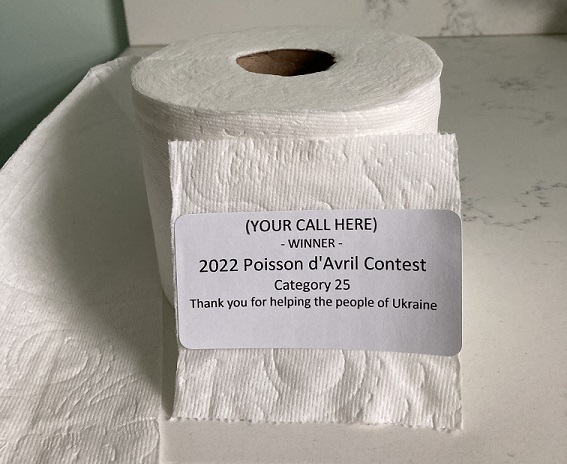 I. DESCRIPTION AND OBJECTIVE:

Unlike many Radiosport events, which are held on the air and some of which have become way too serious, this one is just for grins and giggles.This is supposed to be FUN! And this year the Poisson d'Avril celebrates the last member of Canton High Class of 1971 turning 60. We are now all officially older than dirt.

All bands, all modes. If you don't see one you like, make one up. PSK31 losing its appeal? How about PSK43? Or if you are a QRP kind of op, try PSK3. Whatever floats yer boat. The Official Solicitation for contacts is "?CQTEST" on CW,  "izzafrequencyinuseCQcontestCQcontest" on SSB, and whatever those RTTY guys do. As an SO2R entry, two frequencies may be owned at any and all times. If someone tries to take over your frequency while you are on the other radio working a slowpoke, send his call to Pd'A HQ. We will take care of the problem. We know a  guy.

III. TYPE OF COMPETITION (choose at least one):

The Traditional category is based on the legacy operating modes and sub-categories of single-op, multi-single, multi-2, and multi-multi, using human operators operating conventional radios on the amateur bands, and stations consisting of equipment and antennas located within a 500-meter (1640.42 feet) radius. All single-op stations must enter as SO2R, use panadaptors, Skimmers, RBN, chat rooms, and text messaging with CT1BOH. Get with it, boys and girls, this is the 21st century (48th if you use the Chinese calendar). One radio may be used, but only if there is another also being used. The counting of the radios shall be two, and two shall be the counting of the radios. Three radios shalt thou not use. Four is right out. Use one callsign at one station for the period of the contest. Period.

We understand that things can get slow near the end of the contest, so we have created a new category as has been suggested for the November SS contest...SOMC (Single Op Multi Callsign). Each participant in this category may change callsigns to appear as a new station or "fresh meat", and work the same old guys over and over again. Borrowing from the MS and M2 rules of real contests, entrants in this category are permitted 6 callsign changes per hour per transmitter per operator per antenna per ashtray. And you can work the same station on all bands and modes. Dupes? Sure, why not? Kind of like grid-circling but without having to figure out where you are. And remember what Buckaroo Banzai said: "No matter where you go, there you are."

The Poisson d'Avril Contest Committee is considering a survey on whether to merge the Traditional and Avant-Garde categories (and any other future categories). But first, we need to conduct a survey on whether we should have such a survey. Please vote in the Guestbook...let us know if we should have a survey, and who we should invite to participate in the survey, and whether we should actually pay attention to the responses, since we know what we are going to do already. Obviously we don't want readers of CQ-Contest or entrants to any major contest to vote. And don't tell W0UA we are having a survey. Oy vey.

Signal reports must be 59 or 599 and serial number (which must be 59, because I like that number...it's even prime!). On RTTY, the exchange is " 599 59 599 59 5NN 5N 5NN 5N TOO TO TOO TO TOO TO bell bell bell CR CR CR" followed by at least 20 lines of text describing every bit of software you are running complete with version number and specifications of your computer and sound card, then K K K K K. Exchanges WILL be checked and errors will be subject to substantial penalties. K1TN is required to send all exchanges at least twice to make up for not sending them in other contests. What goes around comes around, Jimbo. Some call it karma.

You may choose what to count as multipliers...countries, counties, zones, planets, states of matter, prefixes, suffixes, we don't care. Total multipliers should not exceed the number of QSOs - it messes with the log-checking software. Make the job hard for the log checkers and we take no responsibility for the consequences. Could get ugly.

There is no point. Only a counterpoint. Or is it a counterpoise? And if so, is it folded? Head hurts...or is it Hertz?

All stations: the final score is the result of the total QSO points multiplied by the multipliers times the Pd'A Correction factor. Plus 42.

Did you see the trophy that the W1MD team won for this event a few years ago at Dayton? DID YOU???? It was freakin' huge! All gold-like, shaped kind of like a nekkid woman (or maybe like a lamp that KA9FOX found in a thrift shop), with garland, glitter, and flashing lights. Kind of like the red carpet at the Oscars (why did they name the Academy Awards for a ham radio satellite anyway?). Wouldn't you like to have one like that? Sorry...that was one of a kind. You had your chance. But we'll think of something. Since the Left Coast guys always whine about not being able to win the 160 contest, maybe we'll make something for Visalia.

We require that logs be submitted electronically...this does not mean you can scan a printout of your log and fax it to us (yes, people really do this in real contests). Postings to CQ-Contest, 3830, or any other real reflector count as log submissions. Post your score somewhere, we'll find it. Really. We have nothing better to do than chase your important log. And use any log format...no need to color inside the lines and use Cabrillo. Make up your own format. Files should be named "pda.log" There's no need for the callsign to be anywhere in the file name or your email SUBJECT line. And no need for the the callsign in the log to match the callsign you use in the contest (our log checkers will figure it out - they are used to this sort of mistreatment by now). And if you log on paper, send your log to W7DRA. He needs it to fire up the wood stove in the 160 cabin.

Should be great this year. Have you seen the latest solar flux numbers, or actually turned on your radio lately? There's no meters like ten meters, just keep going up the band until you find a clear spot, even if it's above 29.000. The band just keeps on going. Really! It's all ours. If conditions aren't good, it's like 6M in the January VHF contest. Bleh.

We got red cards and yellow cards. And we're not afraid to use them. We also have special purple, tan, orange, and plaid (for GMs) cards. We're not sure what they mean, but we'll figure something out. We're pretty sure you don't want to get one. Actions and decisions of the Poisson d'Avril Contest Committee are arbitrary and unlikely. If you are disqualified for cheating in any way, and disagree with the actions of the committee, you may contact our chairman, Lance Armstrong, QZ6TZR. It may take him a while to get back to you, but you'll still be disqualified. He's in kind of a bad mood lately...not sure why. And he knows a guy.

Of course, K1AR (family thing) and K3WW (infamous QRP incident in WPX SSB) are banned from entering the Poisson d'Avril for life. You must shun them. N6TV was banned for a while, but we cannot recall why (probably for this) so he is reinstated. Check the disqualifications page. And feel free to make suggestions for additional DQs for any reason. If someone takes your frequency, tell him you know a guy.

The Committee's favorite Dead line is "Too much of everything is just enough", from the song "I Need a Miracle". And if you've spent the time to read this far, it's a miracle.